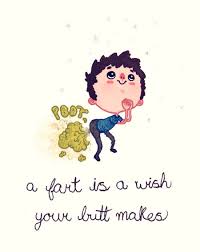 Farting is not acceptable in public. Is this because of the noise? The smell? Or simply because it is a stark reminder that we are all little more than animals making our way in the world? In fact, we praise babies for farting, clapping and whooping like they have just won an olympic gold medal!

Farting is, simply, good for you. If we look at the science behind what is going on, as James Meadow a former University of Oregon researcher spent his time doing, we can see that each person has their own “Microbiome”; the cultures of bacteria that live on and in our bodies and indeed create a cloud around us all the time.

Let’s look at the cloud around us – not all of this is flatulence but some of it is. When you fart, you emit a cocktail of gas but also plenty of bacteria suspended in this gas too.

The average person farts somewhere between 8 and 20 times a day, producing half a litre of gas in 24hrs and although we think of farts as smelly, 99% of their volume is odourless, consisting of oxygen, nitrogen (that we have swallowed) plus carbon dioxide, hydrogen and methane produced by our gut bacteria.

The smelly part of a fart comes from the sulphide products from our bacteria digesting what is in our gut.

Without our gut bacteria we would be in a lot of pain, so if you aren’t farting it is a good indication that your gut bacteria aren’t doing their job probably. So next time you feel the need to ‘fertilise the air’, think of yourself as a well oiled machine working at peak performance!